THE HIDING PLACE: A true story of indomitable human spirit and forgiveness despite resentful experiences 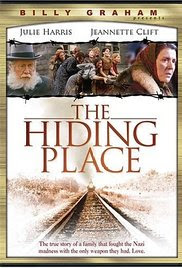 Different popular war movies regarding World War II and Holocaust are created to know history. There are lots of titles. Schindler's List, The Pianist and Come and See come to mind. These three movies join the list to name a few.

There is another exceptional war movie that captures humanity in times of peril. It's "The Hiding Place".

The Hiding Place is a produced by Billy Graham Evangelical Association under their film production divisional wing World Wide Pictures. The film is based on the autobiographical book of the same name by Corrie Ten Boom. The film is a real-life account of the Ten Booms experience as they help the Jews to escape the Nazi. It has given a limited release.

The story begins as Nazi invade Holland in 1940. Papa Casper Ten Boom (Arthur O' Connell) is a watch repairer. Her two spinster middle-aged daughters,  Corrie (Jeanette Clift) and Betsy (Julie Harris), live with him. They live a quiet life. However, Jews are arrested by the Nazis even in Netherlands. The Ten Boom family are Christians. Their hearts are moved with the Jews situation. A part of their home is specially built by the members of Dutch Resistance. After prayerful consideration, the Ten Booms decide to open their home to Jews. They hide them as they seek refuge from the Gestapo. Even though their Dutch heritage is considered Gentiles, they risk their lives for the Jews. "Remember, it is the Jews who gave us the Bible and our Savior.", as Papa Casper tells them

They also learn that hiding Jews are not easy. They encounter different personalities and characters of Jews refugee. There's one Jewish man who is hard to deal with but the Ten Booms remain patient.

On February 28, 1994, the Nazis discover that the Ten Booms are helping the Jews by hiding them. Corrie and her entire family alongside with their friends are arrested after a Dutch collaborator pretended to be a Jew who needs a refuge for his family and betrayed them.

Fortunately, the hidden Jews are able to escape. The family suffers as they face hardships. The Nazis send Corrie and her sister Betsy to a concentration camp in Germany for hiding Jews in their house. Their father, Casper, dies before he reaches the concentration camp. The two sisters are forced to work. They are also given not enough food.

One time, a Nazi lady guarding women work is not satisfied with Betsy. She hit her hard. Corrie wants to get even with the Nazi lady but Betsy always reminds her not to be resentful. Corrie and Betsy encourage one another. Corrie is almost losing faith in their situation but her sister always motivates her even though others mock them in the camp because of their faith.

On December 1944, Corrie is surprised that she is considered to leave the camp. Later on, it is discovered that a clerical error happened. Her fellow prisoners left in the camp are put in the gas chambers the following month.

At the film's epilogue, an elderly Corrie Ten Boom concludes, "No pit is so deep that He is not deeper still."

This film also depicts the horrors of war. It includes few violent moments such as disturbing beatings and other inhumane treatments that happen in the camp.

The movie is slow-paced and somewhat dragging at the first thirty minutes. Though, it manages to let the audience feel the tension specially when Ten Booms are discovered hiding Jews. This motion picture will let you feel heavy because of what happened to the characters.

In a situation where love and forgiveness must be shown, Corrie and Betsy never fails to do it. Corrie somewhat entertains negative thoughts but her sister Betsy reminds her the love of Jesus and His forgiveness. Corrie learns to forgive and finds strength by relying on Jesus.

Newcomer Jeanette Cliff is excellent as the strong-willed Corrie. Five-time Tony Awards winning actress Julie Harris is magnificent as the weakling but strong in spirit Betsy. Academy Award winner Best Supporting Actress Eileen Heckart is not to be ignored as the world hardened woman due to circumstances but retains her humanity.

This movie is must see. Don't miss it.
Posted by Jim Paranal's Pennies of His Thoughts at 11:59 PM