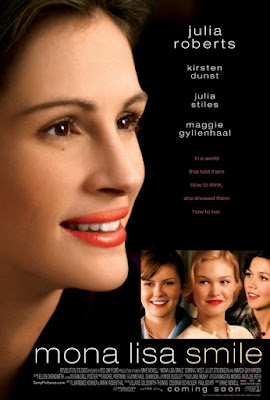 Julia Roberts stars as Katherine Watson. She’s a recent UCLA graduate and has been hired as new art history teacher of an all-female campus Wellesley College. She’s an independent and opinionated woman. As she starts teaching, she challenges her students and even the school faculty to be freed from society’s treatment of women and to think out of the box during their era. In the 1950’s, women are limited to have a too-good-to-be-true domestic routine and lifestyle after they graduate in college. At first, her determination is not accepted by her students and colleagues. Later on, her students Betty Warren (Kirsten Dunst), Joan Brandwyn (Julia Stiles) Giselle Levy (Maggie Gyllenhaal) and Connie Baker (Ginnifer Goodwin) are moved by Watson’s belief. Watson’s influence began to change their minds about their future. Meanwhile, Watson also tries to deal with her own desires.

Mona Lisa Smile is an example of a feminist film. In this film, women issues are discussed such as rejecting oppressive treatment of society and the awakening of women not to limit what their gender dictates as society is concerned.

Maggie Gyllenhaal shines as the stubborn student who later learns to respect her professor. Julia Roberts is not new to such roles. We see her portraying strong women and accepting mature roles like Erin Brockovich and Closer. Julia Stiles also is excellent as a lady who stands on her decision not to marry her long-time boyfriend. Kirsten Dunst’s character sadly falls on the norms of the society and accepts the consequence of her decision. Marcia Gay Harden is funny as a spinster who is a product of the 50's rigidity. Other supporting actors (Ginnifer Goodwin, Dominic West, Topher Grace) complete the ensemble.

Over-all the movie is good.
Posted by Jim Paranal's Pennies of His Thoughts at 5:25 AM