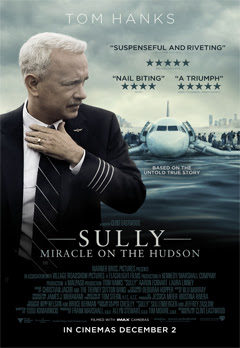 Sully (2016) is a movie about leadership where the leader makes a crucial decision in a crucial situation. It's a biopic and a film about heroism.

This American film stars Tom Hanks in the title role as Chesley "Sully" Sullenberger. Based on the autobiography book "Highest Duty" by: Sullenberger and Jeffrey Zaslow. This film is a story of pilot Sully's January 15, 2009 emergency landing of an Airbus A320 on Hudson River because of a birdstrike. 155 passengers and crew members survived with slight injuries. The film also shows the investigation of the incident.

I'm not a great fan of Clint Eastwood but I love how he handles the direction for this film. I admire his works such as "The Bridges of Madison County" (1995) and "Invictus" (2009). Hanks and Eastwood first collaboration is exceptional.

Aaron Eckhart is good on his part as First Officer Jeffrey Skiles even other supporting actors like Laura Linney. The music is also good.

While watching the film, I remember the book "Outliers" by: Malcolm Gladwell in a particular story of an airplane crash where the black box is used in investigation. Moreover, Sully's decision reminds me of John Maxwell's guidance in leadership.

What really amazes me regarding the film is the miracle. It made me cry while watching it. God really works in unexpected ways. In their situation, it's a miracle that everyone survived even if it landed on Hudson River. Perfect timing also is God's will in their situation. As Sully reads a quote, it goes like this "a delay is better than a disaster".

Truly, Sully is a testament of God's miracle.

Posted by Jim Paranal's Pennies of His Thoughts at 6:36 AM