WAR ROOM: Spiritual warfare brought into screen at its finest 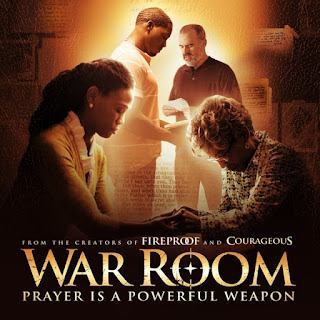 "Don't fight  here! This is the war room!" as one character in the film Dr. Strangelove stated.

Yes, if we can take war room literally as it is or we can just pick that idea or we can also think of other war room instead.

On a serious note, Paul said in Ephesians 6:12, "For our struggle is not against flesh and blood, but against the rulers, against the authorities, against the powers of this dark world and against the spiritual forces of evil in the heavenly realms." That's what this film is all about. From that Biblical verse, we get a glimpse of a different war room.

Tony (T. C. Stallings) and Elizabeth Jordan (Priscilla Schirer) together with their daughter Danielle (Alenna Pitts) seem to have a picture of a perfect family. However, the head of the household, Tony, has hideous agenda. He steals products from the pharmaceutical company his working with, tempted to cheat on his wife, becomes verbally abusive to his wife and never available for his daughter.

Elizabeth, a realtor by profession, meets elderly Ms. Clara (Karen Abercrombie) who is interested to sell her house. Ms. Clara discerns Elizabeth's situation and gives her pieces of advice to pray for
it. She also shows Elizabeth her praying room which she calls "War Room". She believes that "in order to stand up and fight the enemy, you need to get on your knees and pray."

Elizabeth struggles first in praying for her husband. Then, she learns to trust God and pray seriously for Tony. While, he's away on a business trip he has a dinner with another woman. She tempts her to go on her apartment. He suddenly is ensnared by the woman however he gets nauseous and runs to the toilet to throw up.

Afterwards, his boss finds out that he's stealing drug samples. He gets terminated because of that. Tony repents and asks God for help. Unbeknownst to Elizabeth and Danielle, he hides drug samples and he's doing it for a long time. He also surrenders the remaining samples he has to his boss even though it could send him to prison. Tony's former boss is surprised but admires his confession. His former boss decides not to press charges anymore. Tony sees his daughter practice for jump roping skills because of a Double Dutch competition at the local community center. He decides to joins his daughter and her friends to the contest. Their team gets the second place in the final result. It doesn't harm Tony and Danielle's relationship instead it makes their bonding grow stronger.

Elizabeth successfully sells Miss Clara's house to a retired pastor. He discerns that someone is using one room in the house for praying sessions and that makes his firm decision to buy the house. Tony, on the other hand, is offered a job as a director of the community center. It's not as high paying work unlike his previous job but he realizes that Elizabeth's extra work and his new job can make their family survive. He gladly accepts it.

The film concludes with Tony surprising his wife by giving her favorite dessert and a foot massage. Miss Clara, on the other hand, lives with her son and prays a powerful prayer.

Among the four Kendrick Brothers movies made, this one so far is my favorite. Marriage as a main plot and theme of the story in Kendrick Brothers movies is often discussed. It has also an in-depth look from their previous movie "Fireproof". In "War Room", though it has different characters and situations, it is poignantly depicted. Miss Clara as a supporting character has a great impact to the lead character Elizabeth to put her trust on God regarding her marriage through prayer. In "Fireproof" (2008), Caleb's father let him have the 40-day love journey through a journal and prayer. It's noticeable that there were unnecessary characters in "Fireproof" as well as superfluous subplot. In "War Room", we can see the improvement of Kendrick Brothers in storytelling, narrative and direction as well as technical aspects, aesthetic, artistic and creative values.

In the scene where Tony confesses and asks for his wife's forgiveness, Elizabeth's  (Priscilla Shirer) response through her nuance is subtle. She tells her husband, "I'm not done with us. I will fight for our marriage. I've learned that my contentment doesn't come from you. I'm His before I'm yours. And because I love Jesus, I'm staying right here."

There's also a hair-raising or goosebumps  moments when Elizabeth realizes that she's more than a conqueror. It is when he rebukes and thwarts the enemies distractions by declaring God's power. This moment is powerful among memorable speeches in mainstream movies. "I don't know where you are, devil... You have played with my man. ...No more! You are done! Jesus is the Lord of this house and that means there's no place for you here anymore. So take your lies... accusations and get out in Jesus name! My joy is found in Jesus and just in case you forgot, He has already defeated you, so go back to hell where you belong and leave my family alone!"

War Room might sound preachy to some viewers. It is still enjoyable to watch and it depicts an accurate look at marriage. War Room brings us to a different level of experience specifically regarding prayer. It may not happen to us the way we see it in the movie but prayer is an essential part of life.


Posted by Jim Paranal's Pennies of His Thoughts at 7:54 AM