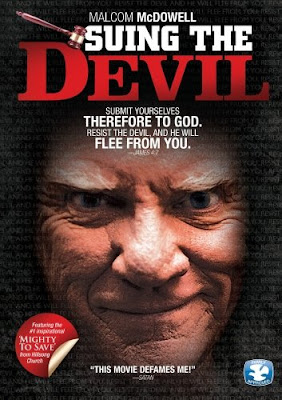 Malcolm McDowell appears in the Aussie flick "Suing the devil" as satan. No wonder that this is one of his villainous roles to date after his signature and breakthrough role as the brainwashed violent Alex deLarge in the highly-controversial Stanley Kubrick futuristic movie based on Anthony Burgess novel "A Clockwork Orange" (1971). In the film, McDowell plays satan. Luke O 'Brien (Bart Bronson) is a working progress Christian who sues satan for 8 trillion dollars. Sounds crazy right? This concept could have been created in comics or a stage play production.
Surprisingly, satan defends himself by hiring top lawyers in the world and let him show the world his powers. This becomes a trial of the century. Some critics might find the film laughable because of it's style and approach. The filmmakers want to make the movie in a lighter note by creating comic dialogues especially on part of satan. On the other hand, filmmakers see to it that the devil is not a reckoning force that can be underestimated. The enemy is depicted as a scheming, manipulative and strategic force. Luke, meanwhile, is not a perfect believer. In the film, he personifies a struggling Christian facing issues with his past.
The film has many flaws. For instance, the technicality of the legal case proceedings and processes even some unnecessary or irrelevant dialogues. On serious note, we can see the enemies deceptive ways. There are remarkable parts of the film that sticks to mind. Here as follows: 1. When top lawyers of the world were asked if they believe in God, all of them raised their hands. And the follow-up question "do they like God?", nobody raised a hand. 2. In a mini-tribute to the Tom Cruise-Jack Nicholson courtroom drama "A Few Good Men" (1992), Luke said that he wanted to know the truth. The devil responded, "You can't handle the truth!".
3. Suddenly, the opponent or defendant let his lawyers allow to show that he's not the devil by tricking them because his mental condition. 4. The devil let him show his power to court terrifying all of the people inside the court. Well, there's a spoiler alert. Better watch out. It's still a thought-provoking movie. It's giving the audience an idea that the devil trick is to let people forget God.Trivia: According to imdb.com, LA Times reported the film as one of the most illegally-downloaded movies of 2012.

Posted by Jim Paranal's Pennies of His Thoughts at 10:09 AM