DO YOU BELIEVE: More than a faith-based movie 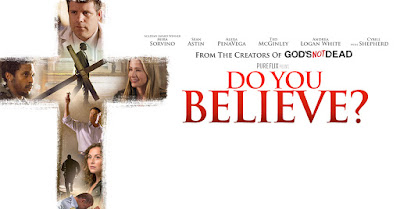 Pureflix Entertainment brought another remarkable movie after “The Encounter” (2010) and “God’s Not Dead” (2014). For several years, Pureflix developed quality faith – based movies. Do You Believe? (2015) is a movie that challenges our perception on how faith must be accompanied with works or deeds. With its ensemble acting including 1995 Academy Award Winner Mira Sorvino (Mighty Aphrodite, Romy and Michelle High School Reunion), Lord of the Rings series star Sean Astin, Cybil Shepherd (Taxi Driver, Chances Are), Delroy Lindo, Alexa Peñavega (Spy Kids) and Lee Majors, it’s a must see film of the year!
Never have I seen a faith – based movie so far that discusses different struggles of various people with their decision to act or to move for what they believe. In last year’s groundbreaking effort and controversial God’s Not Dead, it showed different characters whether they compromise or not compromise their faith in a highly – pressurized environment. Five years ago, The Encounter placed five characters in difficult situations only to find out that they actually encounter Jesus Christ. In Do You Believe?, the film makers convey their messages clearly to anyone who believes in the Lord Jesus Christ. Not all people walking in the faith to our Lord have smooth sailing life. In the film, we observe characters that have active and inactive faith. We also see characters who are backsliders, doubtful, skeptical, atheist, needy, working progress, changed and transformed. These characters are human which we meet in our daily life. It could be our friends, family, relatives, classmates, workmates even church mates and pastors.
The film confronts in an in – depth level when it comes to faith and works or deeds. It’s not preachy because usually most faith – based movies tend to fall with that mistake. The movie experience let us reflect on what areas of our life are we lacking on faith. This movie is more than a faith – based feature because it encourages and motivates us to act or to move. We can watch a lot of inspirational and life – changing movies, as well as read self – help books, but if we’re not moved to change, it’s not effective and not intentional in molding our personal relationship with the Lord.
This movie reminds me of the Oscar winning film "Crash" (2005). This film is considered equal to the film in Christian cinema because of the technique and style.

Posted by Jim Paranal's Pennies of His Thoughts at 10:14 AM